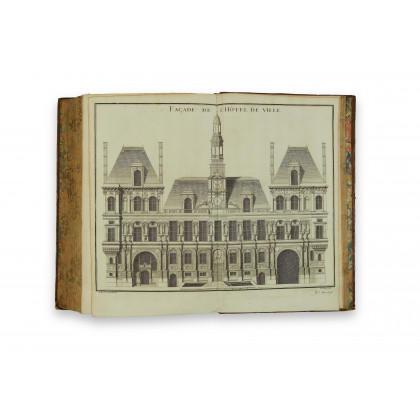 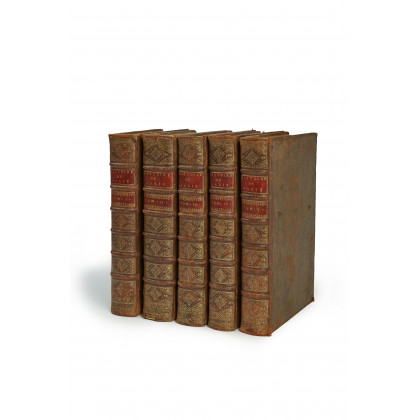 FELIBIEN, Michel (1665-1719) - Histoire de la ville de Paris. Paris: Guillaume Desprez and Jean Desessartz, 1725. An attractive copy of the first edition of Felibien's Histoire, which provides a detailed history of medieval and Renaissance Paris, as well as 'extensive documentary material' and 'pieces justificatives' which had been collected by Felibien and arranged for publication by Lobineeay in vols III, IV, V. This type of interest in historicism and in documentation is a continuation of antiquarian interest of the late sixteenth century 'That Felibien's study of Paris, comprising extensive amounts of secular, medieval documentation, was supported by the Benedictione monastery suggests the special position of the congregation of Saint-Maur in the establishing of pre-nineteenth-century attitudes about the Gothic period and about Gothic architecture' (Millard p.190). 5 volumes, folio (387 x 250mm). Half-titles in vols. I and III only. Engraved frontispiece, 29 (of 32) engraved plates of which 23 folding or double-page (in addition to the 3 missing plates it's lacking the large engraved map of Paris, occasional light stains and spots). Contemporary calf, spines in 7 compartments with 6 raised bands, morocco lettering-pieces, gilt spine and marbled edges (a few spines chipped, some light rubbing, joints starting). Brunet II: 1203; Millard French 73. (5) The lot is accompanied by an export license.