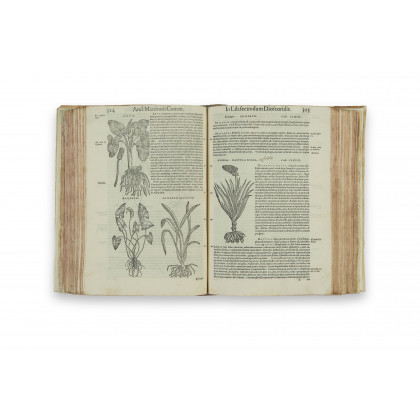 MATTIOLI, Pietro Andrea (1501-1577) - Commentarii secundo aucti, in libros sex. Venice: Vincenzo Valgrisi, 1558. Second Latin edition, the first was published in 1533. Matthioli was the foremost botanist of his time and spent a long period in Prague as chief physician to Archduke Ferdinand II, to whom this book is dedicated. His herbals were the most widely used in the sixteenth century and beyond, bringing attention for the first time to many plants which had been discovered in the New World. 2 parts in one volume, folio (292 x 204mm). Printer's devices on titles of both parts and at end, numeours woodcut illustrations and initials (first and final leaves reinforced at margins, few occasional light spots, lightly cropped). Contemporary reused vellum, manuscript title on spine (new endpapers). Provenance: Raphaelly Prius? (ownership note on title).