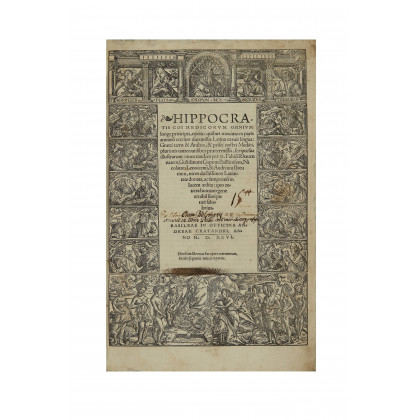 IPPOCRATE (460 D.C.-370 D.C.) - Opera. Basel: Andrea Cratandri, 1526. Extremely rare Second edition in Latin of the Hippocratic corpus with interesting provenance. The copy was owned by doctors since the time of publication and it was then bound in the 18th-century by Marc-Antoine Petit, a Lionese surgeon, who was known mainly as an educator. He was the founder of the first anatomical cabinet in Lyons in 1796 and head surgeon at the Grand Hôtel-Dieu (1793-1799). In 1800 he became a member of the Academy at Lyons. The book consists mainly of late 5th-early-4th-century B.C. works from the medical school of Cos. "Although none can be attributed with certainty to Hippocrates, the writings retain their historical significance as the earliest existing sources of Western medical thought and practice" (Norman). This edition is a revision of the translation by Calvi published in Rome the year before, replacing versions by other translators for some works. Folio (315 x 207mm). Title and first page of text within engraved border by Hans Holbein the Younger, decorated woodcut initials and tailpieces (few tiny wormholes, some light waterstaining). 18th-century calf with "Marco Antonio Petit" within a floral border on front panel, gilt spine, marbled edges (margins rubbed, rear endpaper loose, light scuffing). Provenance: contemporary ownership inscription - early ownership inscription then reused by: - Dam Bolomerii (ownership inscription on title, various annotations and underlining) - Marc-Antoine Petit (1766-1811, Lionese surgeon; binding). The lot is accompanied by an export license.