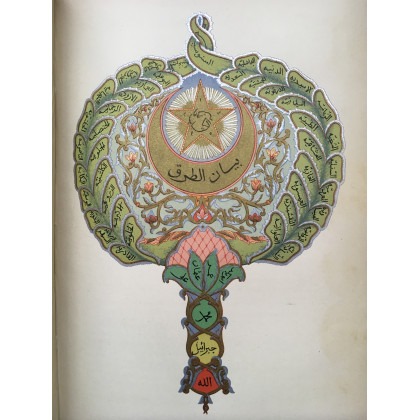 LA ROQUE, Jean de (1661-1745) - Voyage de l'Arabie Heureuse. Paris: Andrè Cailleau, 1716. Second edition of La Roque's writings on the French expeditions in Yemen in the years 1708 and 1713. The book concludes with a lengthy description of the cultivation and consumption of coffee in southern Arabia and is considered an important early work on the subject. 12mo (159 x 96mm). Woodcut device on title, folding engraved map of Yemen and 3 engraved plates, woodcut headpieces and initials (some browning, waterstaining and spots, some small tears to fold of plates). Contemporary calf, gilt spine (some waterstaining and rubbing). The edition printed the same year in Amsterdam has an engraved frontispiece not present in this Parisian edition. Atabey 673.