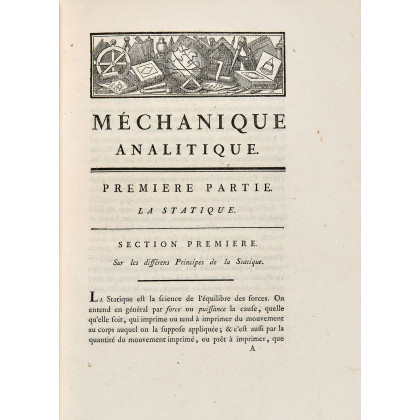 LAGRANGE, Joseph-Louis (1736-1813) - Méchanique analitique. Paris: Desaint, 1788. A good copy of the first edition Lagrange's foundation work on analytical mechanics. Lagrange's masterpiece was an extension of Newton's work on mechanics. In it he moulded theoretical mechanics into a system from which fundamental equations describing the motions of any systems of bodies could be derived. To achieve this Lagrange combined the principle of virtual velocities with d'Alembert's principle. He thereby set down the principle of virtual velocities as applied to mechanics. In his preface, Lagrange draws attention to the absence of diagrams in the book, which he believed the lucidity of his own presentation had rendered superfluous. 'With the appearance of the Méchanique analitique in 1788, Lagrange proposed to reduce the theory of mechanics and the art of solving problems in that field to general formulas, the mere development of which would yield all the equations necessary for the solution of every problem.. [it] united and presented from a single point of view the various principles of mechanics, demonstrated their connection and mutual dependence, and made it possible to judge their validity and scope' (DSB). 4to (267 x 207mm). Woocut headpiece, mathematical formulas in text. Contemporary calf, gilt spine with title on red label, gilt inlays, marbled endpapers (lightly rubbed).