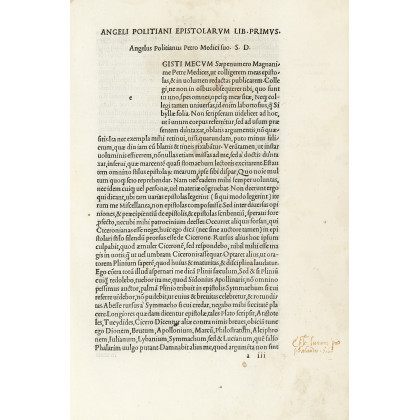 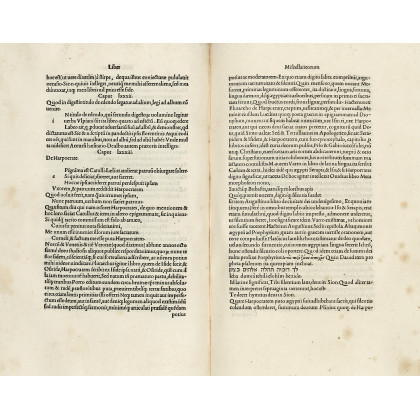 POLIZIANO, Angelo (1454-1494) - Omnia Opera Angeli Politiani. Venice: Aldo Manuzio Romano, 1498. First edition, the first collected edition of a contemporary author and the first use of Hebrew type by Aldus on leaves C5v, line 21, and H8r, line 32. The Florentine Poliziano, legendary among his humanist contemporaries and still today for the breadth and acuity of his Greek and Latin learning, started to organize his many writings into a corpus in the year of his premature death, planning to begin with an edition of his letters. The project was continued by his friend Alessandro Sarti of Bologna, who arranged for printing by Franciscus Plato de Benedictis. But Plato de Benedictis died in August 1496, having just begun to work on the Epistolae (of which two early sheets survive as binding waste). The project was then taken up by Aldus, a longtime admirer of Poliziano’s scholarship. In his introductory letter Aldus refers to some of the difficulties of gathering the source material: he felt sure that certain Florentines held on to authentic writings by Poliziano, intending to increase their own reputations by plagiarism. The Psalm quotation in Hebrew characters on H8r was probably not from a fully realized font. It is different from the font found in Aldus’s Rudimenta grammatices latinae linguae, February 1501, which contains a very brief Hebrew grammar. Folio (319 x 216mm). Text in Latin, Greek and Hebrew, with blank K4 (some tiny wormholes which occasionally touch a few letters in the first part of the book, few leaves with some light waterstaining, the final 8 leaves with heavier waterstaining at outer margin and the final 4 leaves therefore cut at outer margin). Modern vellum, manuscript title on pine, red speckled edges. Provenance: early erased ownership inscriptions on title - neat early annotations in texts - Delvecchio (bookplate). The lot is accompanied by a export license.