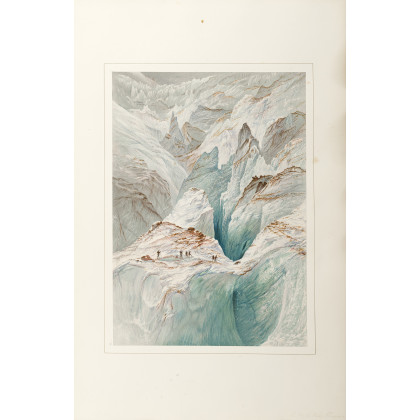 [ALPINISMO] - WALTON, Elijah (1832-1880) - Peaks and Valleys of the Alps. London: Day and Son Limited, 1867. A fine first edition, first issue of the splendid collection of 21 lithographic plates depicting the scenery of Alps. The work never appeared complete at auction after 1982 (RBH) and some copies can be found on the market of the second issue or incomplete (printed a year after). The fine views depict the Monviso, Gran Paradio, the area of Courmayeur, the Matterhon, Weisshorn and some of the most renown glaciers of the Alps. Elephant folio (560 x 366mm). Lithographic title and 21 splendid litographic views (one detached and others with minor marginal small tears). Editorial bordeaux half calf, title in gilt within gilt borders, gilt edges (some rubbing, joints starting).