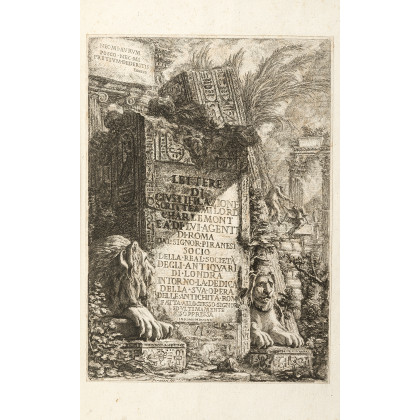 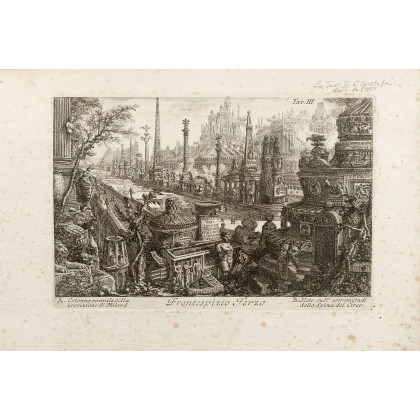 PIRANESI, Giovanni Battista (1720-1778) - Lettere di giustificazione scritte a Milord Charlemont e a di lui agenti di Roma..intorno la dedica della sua opera delle Antichità Rom[ane] fatta allo stesso signor ed ultimamente soppressa. Rome: [G.B. Piranesi], 1757. Piranesi's rare polemic, which disowned Lord Charlemont's patronage and set out Piranesi's own view of the relationship between artist and patron. The Irish nobleman and politician James Caulfield, first Earl of Charlemont (1728-1799), was a patron of the arts, chairman of the committee of the Dilettanti Club and friend of Burke, Johnson, Reynolds, Goldsmith and Hogarth. Educated privately, he went on the Grand Tour at the age of eighteen in 1746, travelling to Turin (where he resided for a year, making the acquaintance of David Hume), Rome, the Greek Islands, Constantinople, the Levant, and Egypt, before returning to Ireland in 1754. Piranesi"s Camera sepolcrali degli antichi romani le quali esistono dentro e fuori di Roma (ca 1750) was published as a prospectus to secure a patron, and Charlemont responded. Piranesi engraved a large number of additional plates, and -- having secured a promise of further subventions from Charlemont to offset the significant financial outlay involved -- added them to the work, publishing the four-volume set under the title Le Antichita romane in 1756. However, by this point Charlemont had returned to Ireland and, despite repeated requests from Piranesi, did not provide the artist with the anticipated payment but only a sum of less than 200 scudi, a figure which Piranesi dismissed as offensively small (in contrast, the Pope had given 1,200 scudi without any expectation of a dedication). In frustration and anger, Piranesi removed the dedications to Charlemont present in the first states of the title-pages to the work, and scrupulously expunged all references to his erstwhile patron from the text. Piranesi published the Lettere di giustificazione the following year, which reprints two of the artist's letters to Charlemont together with a third to Father Peter Grant, who had attempted to intervene in the dispute and mediate between the two parties. The textual vindication of his position is complemented by the series of eight plates which demonstrate the disassociation of Charlemont's patronage from the work in a relentlessly methodical manner; they illustrate the original title-pages with their dedications to Charlemont, two versions of Charlemont's text for the dedication leaf, the first title with the dedicatory text erased, and, finally, the second state of the title-page with the revised dedication. As Wilton-Ely states, "the intellectual and social changes of the late 18th century affected the traditional relationship between patron and artist, and the Lettere are symptomatic of issues greater than a mere personal quarrel. 4to (275 x 190mm). Engraved titlepage (mounted) 7 plates (of 8, lacking plate IV), 5 engraved calcographic vignettes (missing dedication leaf, spotting to the margins of plates). Contemporary printed wrappers.