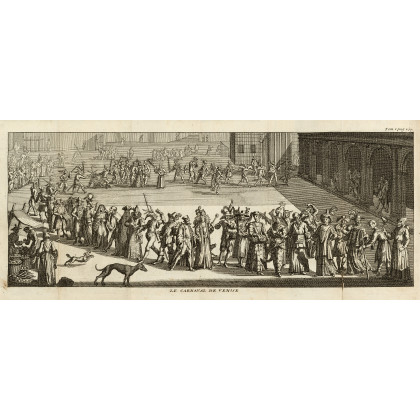 ROGISSART, Alexandre de (attivo dal 1706) - Les Délices de l'Italie, contenant Une description exacte du Pais, des principales Villes, de Toutes les Antiquitez, & de toutes les rarotez qui s'y trouvent. Paris: Compagnie des Libraires, 1707. A fine collection of plates depicting maps, views, monuments and traditions of Italy. Starting from a long chapter dedicated to Venice and its Carnival the work continues until the south of the peninsula focusing on Rome and even more in depth on the beauties of Naples. The final book travels again to the northern part of Italy ending with Milan. 4 volumes, 8vo (163 x 92mm). Additional engraved titles, 158 (usually they are 153?) engraved plates, many folding, including a large map of Italy and a smaller geographical plate of the peninsula, with final blank in vol. III (lacking text leave L4 in vol. II, some clean tears to some plates, one plate loose). Contemporary calf, spines decorated in gilt, red speckled edges (some light rubbing and chipping). Due to the complexity of the collation and to the different composition of copies found on the market the lot is sold not subject to return although the total number of plates is higher than copies sold in the past and found in SBN.