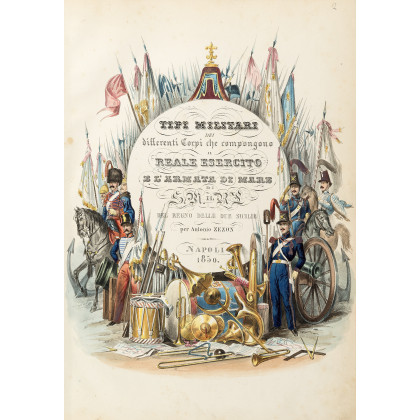 ZEZON, Antonio (1803-1881) - Tipi militari dei differenti corpi che compongono il reale esercito e l'armata di mare di S. M. il Re del Regno Delle due Sicilie. Naples: [s.e.], 1850-54. A very good copy with contemporary colouring of the second issue and therefore with a higher number of plates than the ones called for in the index. A renown Neapolitan work which depicts the uniforms of the army soldiers and which is rare to find complete and with such a high number of plates. The lithographs are printed in seppia by Zenon after De Lorenzo, Ruo, Deluisee. 2 parts in one volume, 4to (356 x 252mm). Half-title, two fine coloured frontispiece and 83 lithographic plates in sepia handsomely handcoloured at the time; there are 70 plates in the first part (versus the 67 called for in the index which doesn't call for the 4 plates of the Tiragliatori and a second plate of the Pubblica Sicurezza; called for in the index is a plate of 1o Reggimento Svizzero and one of the Ministero di Guerra which are not present in this copy); in the second part there are 13 plates (some copies on the market are missing the dedication which is also not present in this copy). Fine contemporary dark leather binding with gilt title and border, decorative border and red edges (some light rubbing to extremities).