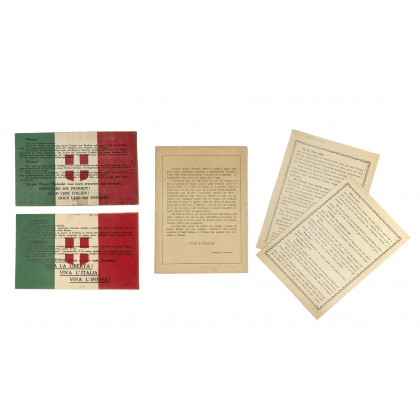 [D'ANNUNZIO Gabriele] - Volo su Vienna, lotto di 5 volantini: "Viennesi!"; "Wiener!"; "Non è vero"; "Es ist nicht wahr"; "In questo mattino d'Agosto". [Abano: Tipografia militare, 1918]. An iconic group of flyers throw over Wien on August 9, 1918 by the bombers of the squadron "La Serenissima" lead by D'Annunzio. 350.000 flyers were thrown carrying propagandistic messages. Most of the flyers sold on the market come from the two planes that for mechanical failures could not accomplish the mission. However, one of the flyers in this group was actually dropped as reported by the note on its back which reports the time in which it was found (Provenance: Vienna 1969). 5 flyers (140 x 220mm) and (240 x 170mm) printed on light paper (some foxing and little rips). Togehter with two facsimiles and provenance documents