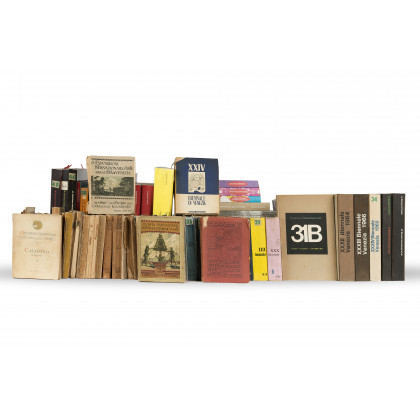 [BIENNALE D'ARTE DI VENEZIA] - Interessante e completa serie di cataloghi della Biennale d'Arte di Venezia che vanno dal primo anno di edizione, il 1895, sino alla 53esima edizione del 2009. Venice: 1895-2009. A large and rare collection, testimony of this fundamental art show. The majority are first editions, all with numerous illustrations which recall the major works of the events, its history and expansion over the years. During the World Wars the event was suspended (in 1916-18 and in 1943-47). The format and the condition varies: the first catalogues, 1895-97, with worn wrappers and incomplete; the first decade of the 20th-century with some wear: some without wrappers and with missing leaves; the second decade with some light wear to wrappers; third decade with lighter wear; the remaining years in good condition (apart from the year 1954 which has worn wrappers). Together with 4 other volumes connected to the Biennale. Sold as viewed and not subject to return.