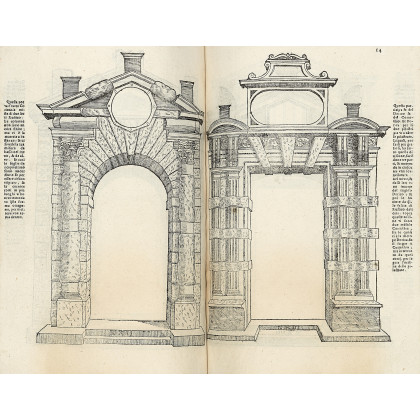 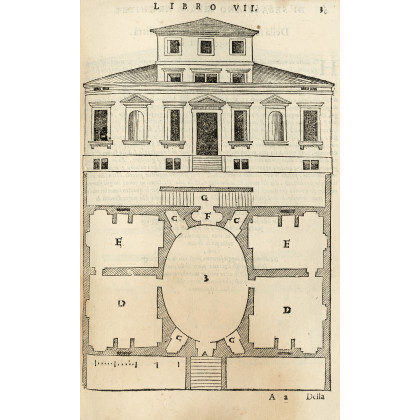 SERLIO, Sebastiano (1475-1554) - Tutte l'opere d'architettura. Venice: Francesco de' Franceschi, 1600. Second collected edition of the seven books. "Sebastiano Serlio is one of the four Renaissance authors, with Giacomo Barozzi da Vignola, Andrea Palladio, and Vincenso Scamozzi, who surpassed in importance Vitruvius and his sixteenth-century commentators" (Millard). Book VII, in both the first and second editions, is dedicated by the printer to Vincenzo Scamozzi, and the index was prepared by Vinvenzo's father, Giovanni Domenico Scamozzi. The illustrations of Book I-V and Estraordinario are from the same blocks as those of the 1584 and the Venice 1566 quarto edition, those in Book VII are reduced copies of the Venice 1575 folio edition. 7 parts in one volume, 4to (235 x 166mm). Large woodcut vignette on general title, titles within elaborate architecture border to each part, initials and headpieces, numerous woodcut illustrations, many full-page (waterstaining, general title reinforced with minor loss, slightly cropped at top margins towards the end). Contemporary vellum, title on later label on spine (modern endpapers, light staining).