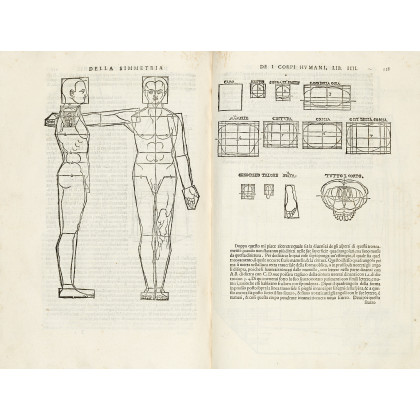 DÜRER, Albrecht (1471-1528) - Della simmetria dei corpi humani nuovamente tradotti dalla lingua Latina nella Italiana da M. Gio. Paolo Gallucci Salodiano. Venice: Domenico Nicolini, 1591. First edition in Italian, translated from Latin by Gallucci with the addition of a fifth book with his considerations about art and poetry. Dürer’s reliance on a framework of geometry for the delineation of human proportion must have appealed greatly to Gallucci as a mathematician, perhaps more so than it actually did to Michelangelo and other Italian artists. Mortimer notes that the Venice blocks are ‘close copies’ of those used for the first edition of the German text, printed at Nuremberg in 1528. Folio (321 x 216mm). Niccolini’s device on title and colophon leaf, numerous diagrams, many full-page, woodcut tailpiece, foliated and historiated initials. Leaves M4, Q4 and Q5 are double pages added to the gatherings; Q4 is printed on both sides and M4 and Q5 only on recto (some light spotting, light staining, title repaired at bottom corner, some light remaining of blue ink on title). Later vellum, title and author manuscript on top edge and spine.