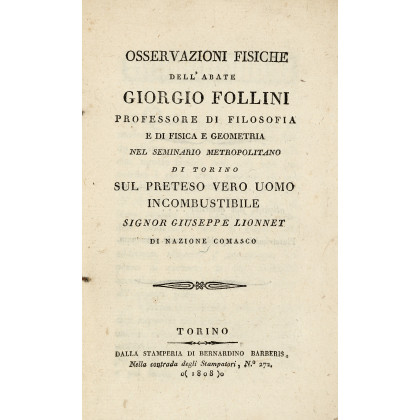 FOLLINI, Giorgio (1756-1831) - Osservazioni fisiche..Sul preteso vero uomo incombustibile signor Giuseppe Lionnet. Turin: Bernardino Barberis, 1808. First edition of this first-hand report on the Italian illusionist Giuseppe Leoni or Lionnet, or 'fire-proof man', who became popular at the beginning of the 19th-century in France and Italy. When he put on a number of shows in Turin, Milan, and Como, the scientist Giorgio Follini, physicist at the university of Turin, decided to investigate. Follini describes Leoni's preparations, such as wiping himself with some spirit - Follini suggests alum - and then gives a close account of seven of his acts, which involved being covered with glowing hot metal bars, putting molten lead into his mouth, etc. - all apparently without showing any ill effect or burns. Follini intends to show that Leoni's 'acts' involved trickery, sleight of hand or the application of anti-flammable substances. 8vo (205 x 130mm). Contemporary light blue wrappers (light wear).