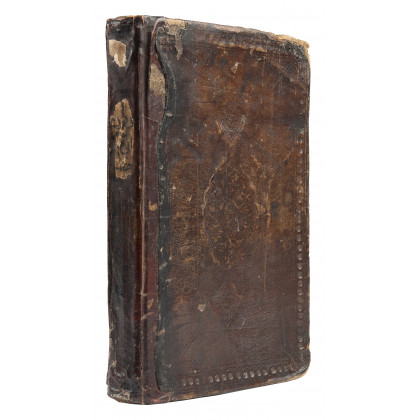 TAMMAM Abu (805-850) - Kitab al-Hamasah, manoscritto arabo-siriano. 1507-1508 (913 dell'Egira). A rare and important manuscript of the Kitab al-Hamasah, the collection of Arabic poems compiled by Abu Tammam. The work is the main source of early Islamic poetry; it consists of 884 "Hamasa", exhortations or short poems which are often extracts from longer traditional poems, organized by topic. This collection was one of the bases of the culture of the elites of the first Arab world and it is said that the famous Saladin was so enchanted that he knew it by heart. (220 x 140mm). 175 leaves, manuscript on watermarked paper, Arabic writing on two columns of 21 lines, titles in red (some marginal waterstaining affecting the text without any major loss). Contemporary calf, medallion decorations within frame on plates, later spine with manuscript title on label (some restorations and minor losses).