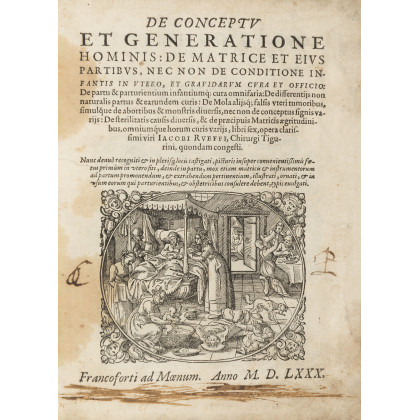 RUEFF, Jacob (1500-1558) - De conceptu et generatione hominis: De matrice et eius partibus, nec non de conditione infantis in utero, et gravidarum cura et officio. Frankfurt: Sigismund Feyrabend for Georg Corvinus, 1580. First edition illustrated by Jost Amman, improving the first edition of 1554. The work was also published simultaneously in German under the title "Hebammen Buch of Rueff’s celebrated manual of obstetrics". It “contains the first true anatomical pictures in an obstetrics book” (Garrison and Morton). “Jacob Rueff, city physician of Zurich, was responsible for the instruction and examination of the midwives of the canton. He followed the example of Rösslin and in 1554 completed his popular guide for midwives, which next to Rösslin’s Rosengarten became the most important obstetrical work of the Renaissance period, and with Jost Amman’s fine woodcuts it is ranked as one of the most famous illustrated medical books of the sixteenth century.. The book is addressed not only to midwives, pregnant women and women in childbed but also to physicians and to the world of scholars in general. Rueff besought the burgomaster to send copies to all midwives and nurses in the canton and they were obliged to have an appropriate section of it read aloud ‘by a well-read woman’, if possible during the first stage of labour at any confinement they attended.. Most of the illustrations in this 1580 edition are the same as in the first of 1554 but are considerably improved as they were all redrawn by Amman, who was one of the most important collaborators at Feyerabend’s press in Frankfurt.. His own splendid woodcuts (none of which are signed) added to the 1580 edition of Rueff.. give a good idea of sixteenth century obstetric practices endowed with a homely charm”. Hagelin, The Byrth of Mankynde, pp 18-23. 4to (196 x 150mm). Large woodcut illustration of a birth scene on title, large armorial woodcut on a2, numerous woodcuts in the text, several full-page, initials and headpieces (L1 in facsimile, minor restorations to title margins and final leaf, some staining and browning, few minor marginal tears). Contemporary vellum, manuscript title on spine (light staining and chipping). Provenance: erased ownership note on title and two initials.