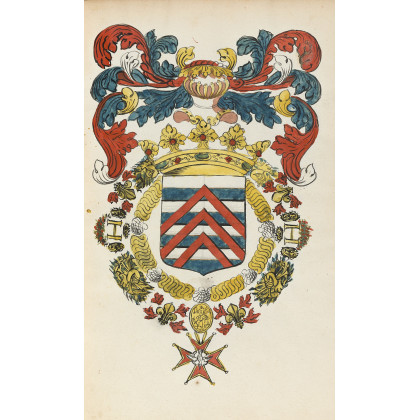 [ARALDICA] - Manoscritto araldico che raffigura i blasoni dei recipienti dell'Ordre du Saint-Esprit e dell'Ordre de Saint-Michel. France: Fine XVII secolo. A fine French heraldic manuscript illustrating the coats of arms of the vessels of the Order of the Holy Spirit. The first coat of arms is of course that of the king, Louis XIV, followed by his brother Filippo d'Orléans and other illustrious members of the French and European nobility. The order was founded by Henry III during the religious wars to protect the King of France and soon became the most prestigious chivalric order of the French monarchy. It was made up of three categories of members, the knights, who had to demonstrate at least 3/4 of nobility, the ecclesiastics and 4 official commanders who were not required to be noble, represented here by Colbert and Le Tellier. The order, already suppressed during the Revolution, was definitively dissolved by Luigi Filippo in 1830. Folio (395 x 260mm). 98 leaves, each with a coat of arms drawn and watercolored by a contemporary hand, at the end of the volume there is a manuscript list of the nobles represented drawn up at the end of the 19th-century (from leaf 57 some waterstaining to top right margin which doesn't touch the drawings, light occasional spotting). Full contemporary calf with gilt decorations spine (somewhat worn). Provenance: Noble bookplate at the counterplate "Nil Nisi Virtute" of Count Alexandre-Charles Rousselin, de Corbeau de Saint-Albin (1773-1845).

Download here the paper form to place a bid.