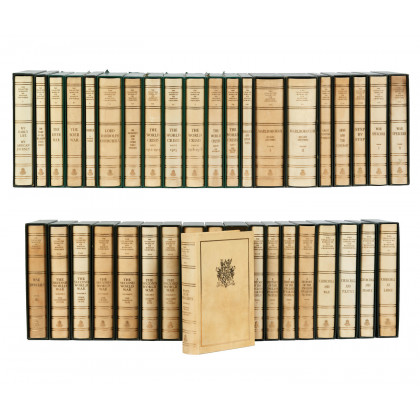 CHURCHILL, Sir Winston (1874-1965) - The collected works [Insieme a:] The Collected Essays. Library of Imperial History, 1973-76. Copy n. 1182 of this Centenary Limited Edition of the Works of Winston Churchill in very good conditions. The edition was announced via full-page advertisement in The Times, at the end of 1973. The Library of Imperial History declared it a "publishing occasion without parallel." It was the first and only attempt of its kind. Only 3,000 sets were to be made. "The specifications were titanic: five million words in 19,000 pages, weighing 19 lbs, taking up 4½ ft of shelf space. To achieve publication, 11 publishing houses in Great Britain, the United States and Canada released their individual copyrights in exchange for the promise that no other complete edition of Churchill works would be published until the expiration of international copyright in 2019" (Richard M. Langworth). The Library of Imperial History declared bankruptcy before the project had been completed, resulting in a run of 2,000 copies. Of these 2,000 copies, only 1,750 sets were ever published. 38 volumes, 4to (233 x 150mm). Original full vellum with gilt armorial device to front boards, spine titled gilt, marbled endpapers, all edges gilt, original green leatherette slipcases stamped with Churchill arms gilt (natural variation to tone of vellum of some volumes, occasional small defects to some slipcases). (38)