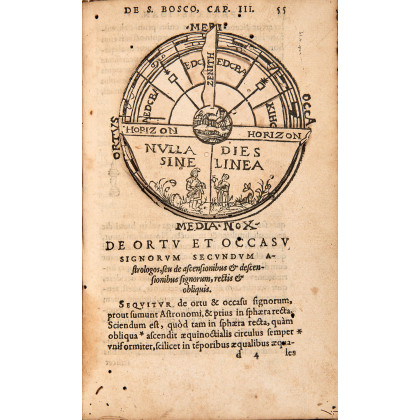 SACROBOSCO, Johannes de (c.1195 - c.1256) - De Sphaera emendata. Lyon: Phil. Tinghius florentinus, 1578. Second revised edition by the astrologer and theologian Francesco Giuntini whom published the first in 1577; with commentaries of the philologue Élie Vinet. The first edition of this astronomical essay by the monk and astronomer de Sacrobosco, teacher at the University of Paris, was published in 1472 and was followed by fifteen editions before the end of the year 1500 and by twenty in the 16th century. 8vo (166 x 113mm). Woodcut vignette on title with zodiacal signs, numeours woodcuts in text and 4 movable volvelles on d4 (wormholes throughout and hole with loss on C1). Modern boards backed in vellum, manuscript title on fore-egde. Provenance: booklabel engraved by Mercorus. As the number of volvelles may vary the book is sold not subject to return.