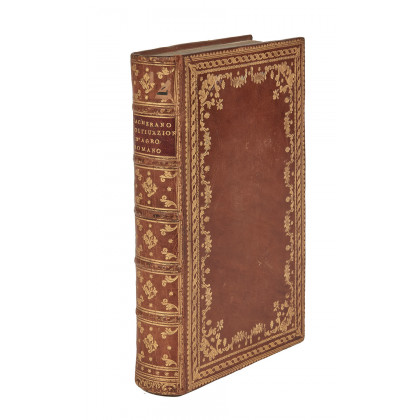 CACHERANO DI BRICHERASIO, Giovanni Francesco Maria (1736-1812) - De' mezzi per introdurre, ed assicurare stabilmente la coltivazione e la popolazione nell'agro romano. Rome: Barbiellini alla Minerva, 1785. First edition on blue paper of this work dedicated to Pope Pio VI, with which Cacherano di Bricherasio outlines a practical and experimental way of the will of reform demonstrated by the Pope. The first part of the Treaty starts from the need to change the whole relationship between the city and the countryside: Rome was too big, too populous, without factories and craft and lived only of the administration proceeds, the courts , the luxury. This situation was greatly exacerbated by the fact that the surrounding area was "mal coltivato o affatto incolto". The State had to rake in at least part of the Agro Romano, dividing it, taking on the task of cleaning it up. The second part of the work is devoted to describing the villages that would be constructed, with their churches, their pastors and doctors, taken from Roman convents and hospitals, thus making them finally useful and active (Treccani). 8vo (218 x 143mm). Wooduct device on title, a folding table and two folding engraved plates (without errata on C4, some light soiling). Contemporary calf elaborately decorated in gilt on panels, spine and edges, red morocco spine label.