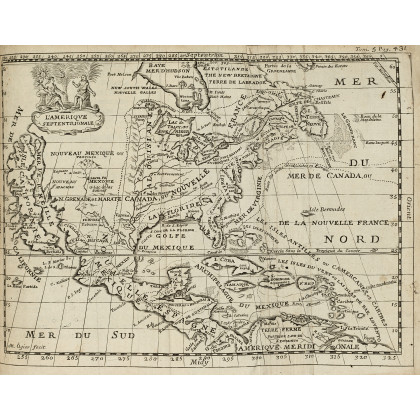 LA CROIX A. Perothee de - Nouvele méthode pour apprendre la géographie universelle. Lione: Lions, Bruyset, 1705 (vol. V) - 1717 (vols. I-IV). Second and third edition of this richly illustrated volumes with many of the plates coloured in a contemporary hand. An interesting repertoire of the world's nations. Among the maps is one of North America with California depicted as an island. 5 volumes, 12mo (160 x 95mm). Engraved frontispiece, title in red and black, 83 engraved plates of maps, portraits and other subjects, many hancoloured and folding (some occasional stains and browning). Near uniform bindings in contemporary calf, spines decorated in gilt (scuffed and with some chipping). Since the number of plates may vary the lot is sold as described and not subject to return. Provenance: ink monogram on titles. (5)