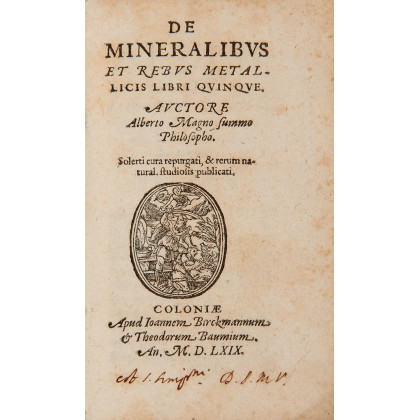 ALBERTUS MAGNUS (ca. 1200-1280) - De mineralibus et rebus metallicis libri quinque. Colony: Giovanni Birckmannus e Teodoro Baumius, 1569. Last separate edition of a work first printed in Padua in 1476. Albertus Magnus' work on minerals was one of the most important medieval contributions to the subject. Like his other scientific treatises, it is based as much on his own empirical observations as on the Greek and Arab authorities. The work "contains the description of some 95 precious stones or minerals.. Albert did not fear visiting loca metallica or alchemical laboratories. However, the main substance was derived from Marbode, Thomas of Cantimpre, and Arnold the Saxon" (Sarton, Introduction to the History of Science, II, part 2, p. 938). Albert "seems to have experimented with alchemy and is said to have been the first to isolate the element arsenic.. During his many travels, he made frequent sidetrips to mines and excavations in search of specimens [the copperworks of Paris and Cologne are mentioned in the text]. He was acquainted with fossils, and made accurate observations of 'animal impressions' and improved on Avicenna's account of their formation. Albert suggested the possibility of the transmutation of metals, but he did not feel that alchemists had yet found the method to bring this about" (DSB). 12mo (121 x 75mm). Small woodcut device on tilte (with R11 blank but without R12 blank, some browning and waterstaining). Later vellum, title on modern spine label (lacking ties, lightly stained).