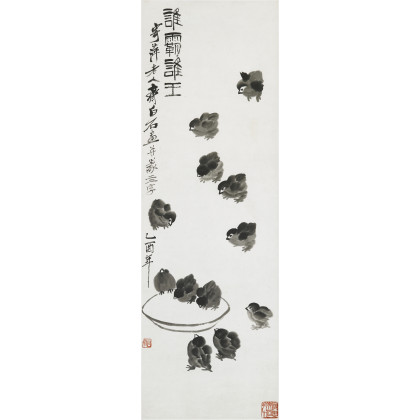 CHICKS Inscribed, signed and dated, with two seals Hanging scroll, ink on paper 99 x 33 cm, mounted and framed Provenance: a distinguished lombard collection, acquired in the first half the 20th century * Export license is available for this lot For similar examples, see: Christie's New York, The Collection of Robert Hatfield Ellsworth, 18 March 2015, lot 306 Christie's Hong Kong, 29 May 2012, lot 2964 The painting art of Qi Baishi is characterised by the vast number of subjects and techniques realised with excellent skills. The path from self-taught painter to prominent artist admired not only in China but in the entire world is built on various styles. Meticulous or brave, precise or free: his style is always filled with an extreme sensibility. Even when portraying subjects belonging to the daily life, like chicks and animal ps in general, Qi Baishi is capable to convey strong and sincere sensations. With his genius brush stroke, the most common subjects acquired a renewed vivacity, a natural strength perceived by the spectator. Equally important is the role played by the calligraphy: the lines are perfectly fit in the aesthetic of the composition. Furthermore, the poetic text - composed by the artist himself - has a metaphoric meaning which attributes an entire new level of importance even to the most common group of chicks