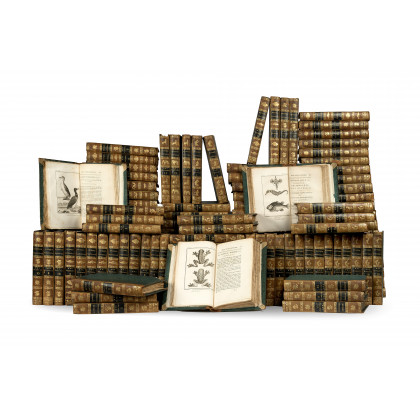 [BINDING] - BUFFON, Georges-Louis Leclerc, comte de; SONNINI de MANONCOURT, Charles-Nicolas-Sigisbert [et al.] - Histoire naturelle, générale et particulière. Paris: F. Dufart, 1799-1808. A fascinating set of the works of Buffon in fine contemporary half calf with the spine decorated in gilt depicting the subjects of the volumes. 124 (of 127?) volumes, 8vo (215 x 135mm). Half-title, engraved portrait of the author. The set of 124 volumes includes: 18 of plants, 13 of fishes, one of cetaceans, 8 of reptiles, 6 of clams, 14 of insects and 64 considered as one collection (vols 1-64 with the following order): 3 hearth theories, stages of nature, introduction to minerals,sperimental parts, hypothetical part, 9 of minerals, 2 animals, 3 men, 13 quadrupeds, 2 monkeys, 28 birds. In good condition (occasional light spotting). Contemporary half calf, spine decorated in gilt, green decorative boards (some light rubbing to extremities). The work is sold as a binding and is not subject to return. Some other copies on the market contained a total of 127 volumes including 3 vols of analytical plates. (124)