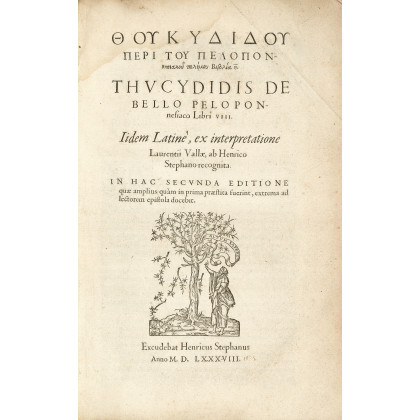 TUCIDIDE - Thoukydidou Peri tou Peloponnesiakou polemou - Thucydidis De bello Peloponnesiaco. [Geneva]: Henri Estienne, 1588. Important edition of Tucidide's works considered to be "the best 16th-century edition of the greatest historian of Athens" (Schreiber, p. 176). The edition was based on the version by Lorenzo Valla and was the first to publish the related scholia. Folio (350 x 220mm). Large printer's device on title, text in Greek and Latin on double column (some spotting, waterstain to right lower margin from T6 to 2C3; wormhole to right lower margin from 3A1 to 3H1 with some loss of text). Contemporary limp vellum.