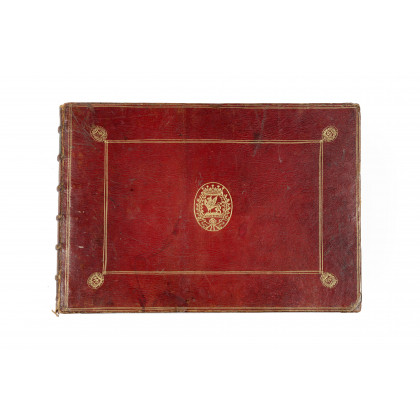 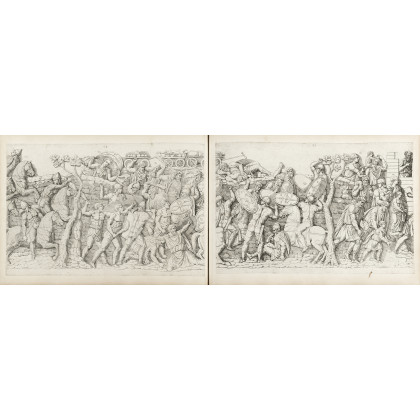 CIACCONE, Alfonso (1540-1599) - Historia utriusque belli Dacici a Traiano Caesare gesti, ex simulachris quae in columna eiusdem Romae visuntur collecta. Rome: Giacomo Mascardi, 1616. A fine copy in contemporary red morocco with the arms of Thomas Wentworh. The second edition of the series of engravings of Trajan's Column, first published in 1576 and one of the most remarkable Renaissance series of illustrations. Although the column became an important source for artists and historians, viewing details of the reliefs presented obvious difficulties. In 1569, the Brescian painter Girolamo Muziano (1532-92) had been granted permission to publish prints of the frieze, which are thought to have been based on the drawings of Jacopo Ripanda (fl. ca. 1500-16), one of the first artists to make a close study of the column from a basket suspended from the top of the column. Many Renaissance artists, including Raphael and Giulio Romano, drew inspiration from the reliefs for their depictions of antiquity. The triumphal column erected by the Roman senate in 113 A.D. to celebrate the victories of the emperor Trajan (died 117) over the Dacians is one of the best-preserved monuments of Imperial Rome. This was the first publication to include a full series of illustrations of the sculpted reliefs. Oblong folio (328 x 473mm). Engraved vignette on title, 130 numbered plates mounted on guards, one double-plate and 2 plates on a single leaf, the text leaves, which have their original white margin, have been mounted to fit the original size of the volume (plate 121 and 122 with a tear to guards without loss, final plate with some reparations, occasional spotting to text). Contemporary red morocco with the arms of Thomas Wentworth, decorated in gilt (extremities lightly rubbed).