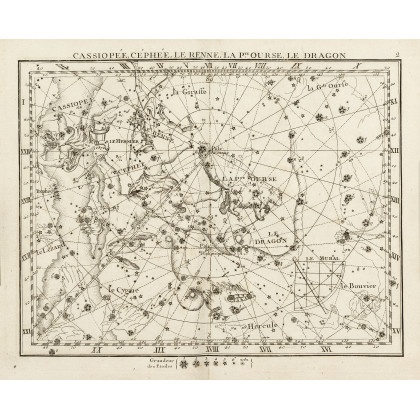 FLAMSTEED, John (1646-1719) - Atlas Celeste publie en 1776 par J. Fortin. Paris: Lamarche, 1795. Second edition in French, the third edition after the first in English of 1729. When first published, the atlas represented a new era in celestial cartography, recording the stars Flamsteed observed using equatorial and ecliptic co-ordinates. For the French edition, Fortin reduced the size of the maps, and the location of the stars were fixed for 1780 instead of 1690, the date which Flamsteed had used. Fortin also added to this edition new discoveries made by Lalande. 8vo (222 x 148mm). 30 double-page engraved plates (some spotting to text leaves). Contemporary blue boards backed in calf, red speckled edges (some rubbing).