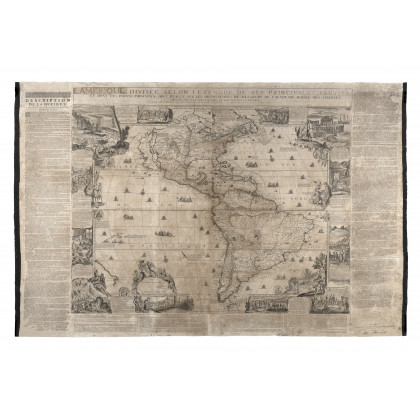 DE FER, Nicolas (1647-1720) - [BEAVER MAP] L'Amérique, divisée selon Letendue de ses Principales parties, et dont les points principaux sont placez sur les observations de messieurs de l'Académie Royale des Sciences. Paris: presso l'autore, 1703. De Fer's monumental wall map of America, which was the first map to introduce the iconic vignettes of beavers in Canada and a cod fishery in Newfoundland, both of which were subsequently copied by other cartographers, including Herman Moll and Henry Abraham Chatelain. The maps is extremely rare in its firs edition and is here presented in its second state (with the cartouche and dedication to the French Dauphin) after the first of 1698, but in its first edition with the captions in the margins (later editions will follow in 1705, 1707, 1713 and 1717). Engraved by Hendrick van Loon and Nicolas Guérard, author of the vignettes showing the costums and traditions of the American people. De Fer created this map based on independent sources, primarily from the Academie Royale des Sciences, which regularly received updated maps of New France in the Americas, including those by Jean Baptiste-Louis Franquelin of Montreal. As a result this map portrays a more accurate position of Hudson Bay in relation to the Great Lakes than on other maps of the time period. The map still features the Island of California covering the entire west coast north of the Tropic of Cancer, with an indented northern coastline after Sanson. The unexplored Pacific Northwest is obscured by a vignette of Native American Indians. The mouth of the Mississippi River is located too far to the west - nearly as far west as the Rio Grande, and the Missouri River is named Outantes R. The British colonies are confined to the East Coast and Florida extends north into present-day western Virginia and as far west as present-day Texas. One of the prominent features in northern Mexico is Les Mine de St. Jean et de Ste. Barbe, the legendary Santa Barbara mines of the Chihuahua-Durango region. In South America a large Marais ou Lagunes de los Xarajes appears in the center of the continent. A partial coastline of New Zealand appears at bottom left. The map is richly decorated with cartouches, sailing galleons, vignettes of the New World, and six medallions of famous explorers and rulers, including Magellan, Columbus, Vespucci, Pizarro, Montezuma, and Artha Balipa. Engraved by Hendrick van Loon and Nicolas Guerard. (1100 x 1635mm). (The map only, without text border: 900 x 1165mm). Printed on 4 sheets over Japanese paper, commentaries printed separately and applied in margins, light colouring of title and borders (some wear which includes some loss to commentaries expertly repaired, minor restoration visible at center of map). The lot is accompanied by the export license.