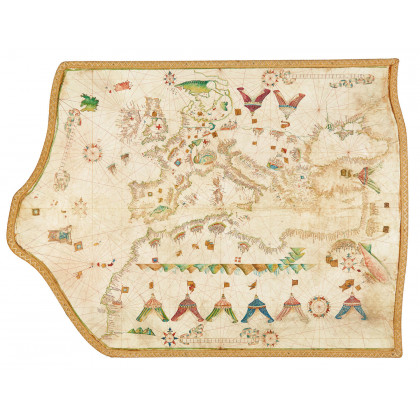 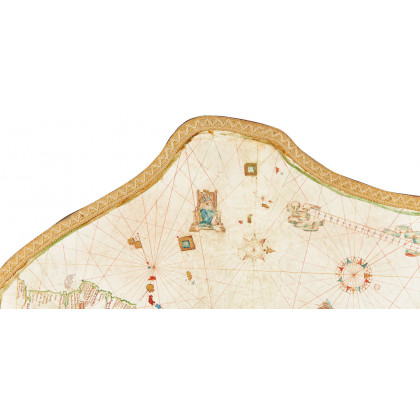 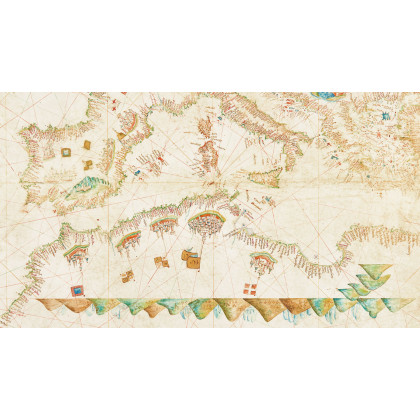 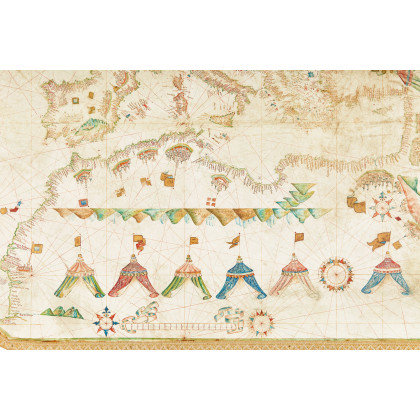 [MAGGIOLO, Vesconte (attivo 1504-1549)]. - A modern portolan chart, ca. 1960, based on a chart from the circle of Vesconte Maggiolo. Italy, probably Genoa: c.1550. A modern copy of a portolan chart on vellum, decorated and illuminated. The work is based on a chart from the circle of Vesconte Maggiolo, the most important 16th-century cartographer from Genoa. The chart depicts Europe, North Africa, the Atlantic Ocean with the Canary Islands and the northern lands of Island, Sweden and Norway; the Red Sea is at the southeastern border and the coastal cities on the Mediterranean Sea are represented in great details. The chart is decorated with 8 compass roses, a Madonna with Child, 8 tents and 28 vignettes of the cities among which the grand cities of Venice and Genoa, each with its flag. This portolan chart is extremely similar to the one at the Beinecke Library at Yale University (Art Object 1980.156) but it presents some minor differences in the position of some of the borders and objects (some are moved by just a few mm and the place names are written in a different hand). The Yale chart is attributed to Vesconte Maggiolo although it is the only unsigned chart by the renowned cartographer. The word portolano is Italian and it means a description of ports along a coastline. The first portolan charts date from the late 13th century and represent an important change in the use of maps and charts. Until this point, most maps had held a religious significance and purpose, such as the medieval mappa-mundi which was based on theological beliefs. The portolan chart contrasts with this tradition as they are based on direct observation and first-hand experience and have a practical purpose. As charts like this were for use by sailors they emphasize only coastal locations, omitting most of the internal detail of the land. Place names are written at right angles to the coast, the more important ports in red ink. The lines which cover this and all other portolan charts are lines of constant bearing known as rhumb lines. Manuscript on vellum, ca. 1960 (798 x 1006mm) pasted on wood and surrounded by a modern brocade "all'antica". The chart was pasted on wood in the 1970s (very lightly rubbed in some parts, it has some light soiling causing some light smearing of the colours, few light creases). Of the Yale copy a digital reproduction can be found here: https://brbl-dl.library.yale.edu/vufind/Record/3521235 This lot is accompanied by CAS